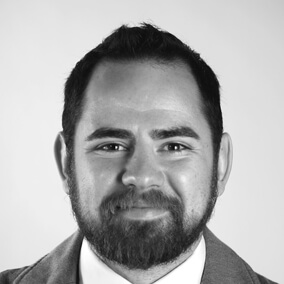 Daniel Yorba spent his childhood in places as varied as Orange County, California; Portland, Oregon; Juneau, Alaska; and Barcelona, Spain; exposing him to many different experiences and cultures. From his father, award-winning architect Tony Yorba, he learned the beauty in functional simplicity which inspired him to create art at a young age.

After graduating from high school, Yorba enlisted in the US Marines, serving as a helicopter crew chief and aerial gunner. After his discharge, Yorba searched for a way of fusing his love of storytelling and emotive art with the industrial/architectural processes of his father along with the disciplines of the Marines. He started spending time at Fuse ID, a Portland design firm where a family friend was a partner. Eventually, he was granted an internship, securing his goal to design useful products that inspire and ignite the imagination.

As an industrial design student at Art Center College of Design in Pasadena, CA, Yorba cultivated a passion for furniture, sporting goods, and two-wheeled transportation. For his thesis project, he designed and fabricated an electric motorcycle along with a branding strategy that led to the formation of his own company: Cycleton, featuring mopeds and a line of bicycles.