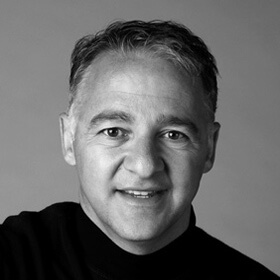 John Kaloustian prefers a three dimensional approach to design. Having a fully equipped prototype studio allows him to sculpt and explore the components of a design to work best with its intended use. “Successful design can add better function and a sense of art to every day objects.”

Kaloustian earned his BFA degree from the College for Creative Studies College of Art and Design in Detroit, Michigan, in 1979. It was during college that his professional experience began with designing corporate aircraft interiors for Rockwell International. After graduating and receiving the Industrial Design Society of America Merit Award, he joined the Steelcase design staff. Just over a year later he established his independent design consulting practice, designing contract furnishings for Haworth and other numerous seating/systems design projects for companies which include KI, Herman Miller, Steelcase and Harter.

His ability to provide design solutions goes beyond the furniture industry to encompass various electronic components for companies such as EDS, Fanuc Robotics, Pentax Cameras, and concept designs for a partnership between Visteon and Bang & Olefsun. Kaloustian has also designed biking products for Trek and Graber, and automotive related products for Goodyear and Somner Allibert, a manufacturer of automotive interior components for BMW and Mercedes.

Additionally, Kaoustian has taught industrial design part time at the College for Creative Studies, College of Art and Design for over ten years. He also enjoys the foreign study of art, architecture, culture and design and traveled extensively throughout Europe, Asia, the South Pacific and the former Soviet Union.